Best Ways To Get Pregnant With Twins Naturally 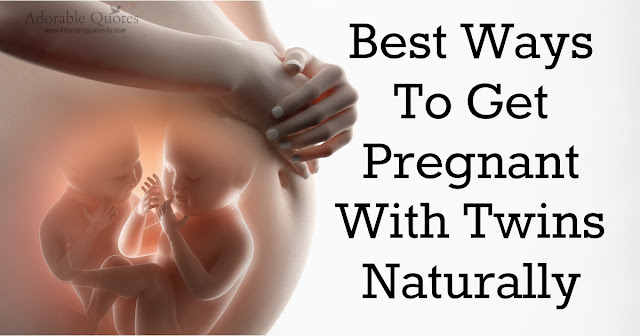 Babies are the biggest asset for every women. Getting pregnant after marriage is such an overwhelming for almost all women who are wishing for a parenting role, that too getting conceive with twin babies are like flying in the heaven. Giving birth to a child is indeed what every woman craves for and this feeling is unmatched with any other pleasures of life. Conceiving with twins under natural circumstances are unpredictable one but while undergoing any medical treatments such as IVF, IUI there are a lot more chances to get conceive with twins medically. But if you are curious to know if there is any natural ways to increase the chances of having twins, then read on further..


Most twins are fraternal. Fraternal twins are conceived when two eggs are released during ovulation i.e. they develop from two separate eggs. Whereas, Identical twins are rare and happen as a result of just one egg which splits in two in early pregnancy.

How to increase the chance of getting conceived with twins.

Here I am posting certain things that improve the chances of having twins.

As I said earlier some factors to be happen naturally and some other factors are in our control that will increase the chances of having twins. According to a recent study women with a BMI (Body Mass Index) of 30 or higher have more chances to have twins.

• Women who are older are more likely to have twins. However, the risks also increase; older mothers have a higher rate of miscarriage.

• Increase the intake of dietary products: Women with adequate intake of dairy products increase their chances of having twins by 5 times.Eat wild yams. The theory comes from Africa. A small town in Nigeria claims to have the highest rate of twins in the world. There may be a chemical in wild yams, or cassava root, which may cause hyper stimulation of the ovaries, resulting in the release of more than one egg during ovulation.

• Try to conceive shortly after stopping birth control pills. If a woman has been using the pill for six months or more her body adjusts to the birth control controlling her hormones. So when she stops taking these pills her body starts regulating its own hormone production again, which at times lead to too much hormone stimulation. This can cause the ovaries to release one too many eggs during the first ovulatory cycle or two after discontinuing the pill. Source